Fill in the Blank Friday: Night of Champions

Another Night of Champions pay per view is on the horizon.  I'll put this disclaimer out there, I have not been watching WWE as much as I should or would like to.  For some reason this week my dish went out and didn't record Raw at all.  No time to watch online, so I'm going to wing it with this post, and make it a prediction blog too.

Night of Champions dates back to 2007 when John Cena beat Mick Foley, Bobby Lashley, Randy Orton, and King Booker in the main event.  I didn't even remember the tag team match between Deuce and Domino and Jimmy Snuka and Sgt. Slaughter.  I believe that's the one time Snuka squared off against his son, who I think was Deuce, but I'm getting sidetracked.  Sorry. 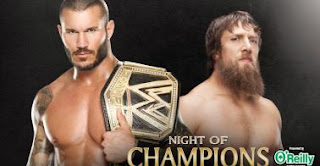 Back to the original point of this.  I'm disappointed to say that as much as I love Daniel Bryan and as over as he is with the WWE Universe, I don't think Bryan will win back the WWE Championship at Night of Champions.  In fact, I don't think he's going to win it at all and The Big Show will be the guy to dethrone Randy Orton.  I could see Bryan heading back to the upper mid-card and feuding with Dean Ambrose for the U.S. Title.

Speaking of the U.S. Title, I'm curious why it's not on the line at Night of Champions.  I haven't read SmackDown! spoilers yet, so maybe it'll be announced there that it's being defended Sunday night. 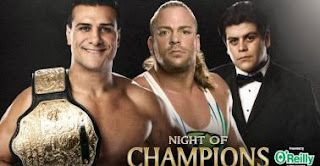 Rob Van Dam will challenge Alberto Del Rio for the World Heavyweight title.  I've never been overly high on Del Rio, and it seems lately (again I haven't watched much) that the WHC is just kinda there.  I still don't understand the pairing of RVD and Ricardo Rodriguez either.  I'd like to think RR is setting up RVD and will help Del Rio retain his title.

CM Punk challenges Curtis Axel and Paul Heyman at Night of Champions.  I don't believe this is for Axel's Intercontinental title, that's why I think Punk will beat Axel and finally get his hands on Heyman.  This could lead to Brock Lesnar coming back out to save his man, but I do think Punk will win.

I'd like to see Natalya walk out of the Divas fatal four way with the title, but I think AJ will reign supreme.

Posted by Kevin Hunsperger at 2:37 PM