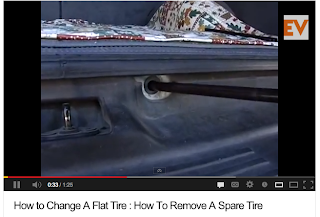 This is not a post about my own YouTube channel, but cheap plug, click here for the My 1-2-3 Cents page.  No, today I'm sending a shout out to Jeff Wong with Expert Village.  While his video on how to remove a spare tire didn't save my life, it certainly saved the day.  I wish I would have found it sooner than I did.

Friday afternoon I had taken my daughter to the mall.  When we got back into the van, it wouldn't start.  I assumed the battery was dead and as I was under the hood looking for possible culprits, the woman parked next to me pulled out of her parking spot.  I heard that telltale sound that she had a flat tire.  I was able to get her attention and tell her about the flat. Then I asked if she needed help.  To be honest, I was hoping she would say her husband or boyfriend could do that job, but instead she said, "actually, yes I do."

It's not that I didn't want to help the woman.  It's more about my inability to do anything remotely mechanical.  I learned how to change a flat tire 25 years ago.  I've changed two in my entire life, but they were both on cars.  This woman was driving an SUV.  After taking what seemed like an eternity to figure out how to jack up the front of her vehicle, I was able accomplish that seemingly simply job and finally loosen the lug nuts and get the tire removed.

Then came the fun part.  The spare was under the back of the SUV.  She said it unscrewed somehow, so I slid under and tried to pry the rusted wing nut (I think that what it was) but it hardly budged.  Even after using the tire iron and some DeIcer (the idea of the mall security guard) I was baffled.  It's a blistering hot day and my body was dripping sweat.  I got light headed at one point as the sweat rolled into my eyes.  My skin burned on the hot asphalt.

I finally thought to Google "removing a spare tire" and came across Jeff's video.  Within 30 seconds, I was in business.  All it requires is putting the tire iron into a small slot in the back of the vehicle.  A few turns later and the tire was free.  Sweaty, dirty, and flustered, I was finally seeing the end of this ordeal. I put the spare on, lowered the jack and loaded the flat tire into the back of the woman's SUV.  She was grateful, and so was I.  Grateful that I could help someone and grateful that the task was over.

I'm also grateful for technology and the fact that YouTube has so many uses other than uploading videos about wrestling.
Posted by Kevin Hunsperger at 5:52 PM