I’ll admit that Kevin and I don’t give TNA the fair amount of coverage we should on the blog. Part of the reason is because most of the feedback we get from readers centers on WWE. That is understandable since WWE is the number one wrestling promotion and most casual fans associate all wrestling as being WWE wrestling. The other main reason for the lack of TNA coverage is when we talk about other wrestling promotions; Kevin usually talks about Pro Wrestling Collision because he’s associated with the company while I usually discuss Chikara because that’s my favorite promotion. I often feel bad we don’t write about more companies, but then I watch cat videos on YouTube* and forget about writing anything for a few days.

Most of the blogs I write are based around concepts I think will get at least two or three comments. That’s another reason why I tend to write about something that is popular or mainstream. However, if I would write more about happenings in the wrestling world that excite or interest me, I would write ten blogs about TNA to every one blog about WWE.
Honestly, while there are certain aspects to WWE programming I like at the moment, I haven’t been able to watch a full episode of RAW in over a month. On the other channel, while not a perfect show, I am more intrigued about what will happen on Impact on a weekly basis.

Recently, TNA President, Dixie Carter made some announcements that change the landscape of TNA Wrestling. Personally, I think these changes are long overdue but at the same time I’m curious to see if they’ll pay off in the long run.

The first dramatic change was going from 12 pay per views a year to only four live shows.  TNA has taped three shows for future PPV airings, and plan to tape either three or four more in March. These taped shows will run during months that don’t have a live show and will be more or less stand-alone shows.   This is a move I have been waiting to happen for at least five years. I wish WWE would also follow suit. Twelve pay per views is too many. By going back to four main shows this should allow TNA writers to build storylines and feuds to the point of wanting to see the match instead of rushing something together in 2-3 weeks. Also it should mean no last minute or unannounced matches added to the pay per view. As an old school fan who remembers when there was only the Royal Rumble, Wrestlemania, SummerSlam and Survivor Series in WWF and Starrcade, SuperBrawl, Great American Bash and Halloween Havoc in WCW, I gladly welcome TNA scaling back to just Genesis, Lockdown, Slammiversary and Bound For Glory. I’ll also admit that I am more likely to order these shows as shelling out $40 every 3-4 months is a lot easier on the wallet than paying every month. 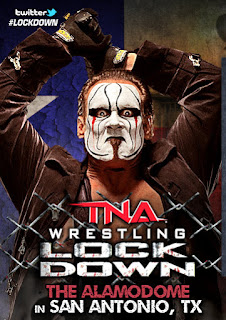 In the last day or two there has been rumors that Lockdown (the next TNA PPV) will only feature the top matches inside a cage instead of having the entire show take place inside the cage as has been the norm since Lockdown’s inception. Again, this is something I’ve been wishing for since the first Lockdown. There was a time when cage matches had meaning. The cage was used as an ender to a violet feud or was used to keep people from interfering. Now cage matches are used as props on a roulette wheel or as an excuse to see a wrestler perform jaw dropping aerial move. In addition to not understanding why guys who weren’t even feuding were placed into a cage match, having every match in the cage took away the prestige of the Lethal Lockdown match. If this is the direction TNA is going with this year’s Lockdown, I fully support them.

Perhaps the biggest news of the last two weeks was Impact leaving the Impact Zone and taking the show on the road. My biggest fear is TNA management will think they can sell more seats than they actually will and thus book large arenas. In my perfect world, TNA would be content to think of themselves as a modern day ECW and book smaller, more intimate arenas. My favorite ECW arena was the Madhouse of Extreme in Queens, NY. If TNA could find someplace like that and realize a rabid, raucous crowd of 1000-1500 fans can make for a better show than a 20,000-seat arena full of fans that only care about the World Champion.

Will these changes help TNA? Will the audience grow over the course of the year? I don’t know. If TNA keeps on the path they’ve been on for the past 8 months or so, if fans would watch with open eyes and leave their blind hatred based on something that happened eight years ago aside, I would think business should grow. TNA isn’t perfect.  Aces and Eights haven’t won a meaningful match. The Knockout Tag Titles are still in limbo. Hulk Hogan is still scaring fans away by saying he wants to be TNA World Champion and the X-Division is treated like a red-headed stepchild. Overlooking those flaws, which could easily be fixed, there is a lot of good wrestling, good characters and freshness in TNA. I will gladly take Jeff Hardy as champion over David Arquette 2k13 headlining Wrestlemania any day. Changing venues will make Impact seem fresher, but the writers and wrestlers still have to deliver. Hopefully they’re up for the task.

What are you thoughts? Will these changes help TNA? Are you more inclined to watch TNA because of the changes or will you be watching Community?