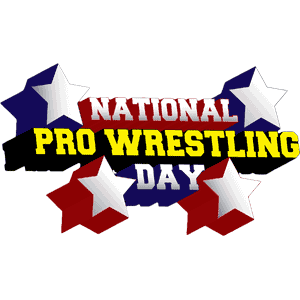 My intent was to write something today about Groundhog Day, but my ideas were either a piece on Beaver Cleavage or the fact that John Cena keeps appearing in main event after main event.  So instead I thought I share some quick thoughts on National Pro Wrestling Day.

Unfortunately I was unable to catch any of the action today.  My friend and colleague in Pro Wrestling Collision, Adam Testa recently lost his home to fire.  Many of us spent part the day cleaning and painting his new apartment.

I love the idea behind NPWD.  It's something that has been long overdue.  In a perfect world, I would have loved to seen representatives from ALL wrestling companies come together and showcase their talent.  WWE, TNA, Chikara, Dragon Gate, even smaller indy companies like Pro Wrestling Collision. Of course in the world of pro wrestling, there's too many egos involved to make something like that work.  That's really unfortunate as I think once a year it would be epically awesome for something like that to happen.  But on the same hand, it's probably good the "big boys" aren't included in the festivities as it's nice to see the up and coming stars do their thing. 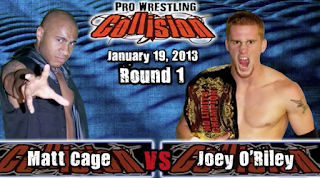 I don't know a whole lot about today's action, but I can tell you that Pro Wrestling Collision has released its first match ever.  The company taped its first show two weeks ago and crowned a new champion.  Check out Matt Cage battling Joey O'Riley in the opening round of the Collision Cup.

If you've been a fan of WWE and/or TNA only, I encourage you to check out other smaller companies.  They are the lifeblood of professional wrestling.  Congrats and thanks to the organizers of this year's NPWD.

Posted by Kevin Hunsperger at 8:49 PM