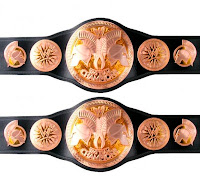 It never fails after I upload a YouTube video on a particular topic I always think of other points that I wanted to make.  Such is the case with today's submission on tag team wrestling.

Until very recently I was hopeful for the tag team division in the WWE.  Just a few short months ago there was a tag team tournament with eight teams to determine who would face the tag team champions.

I'm disappointed Team Rhodes Scholars has disbanded.  This team had a ton of potential and honestly I was shocked they didn't beat Team Hell No at the Royal Rumble.  They held a couple of non-title victories over the champs (I think that's accurate) so to see them be taken out of the scene seems a little silly.  Besides Hell No, I think Rhodes Scholars was the top team in the WWE.

It seems Hell No is heading for a breakup soon too.  It would make sense from a storyline standpoint, although I hate when teams are constantly being split up.  For the time being though, Daniel Bryan and Kane ARE the tag team champions, so I'm really not happy about the fact that Bryan is in the Elimination Chamber match to determine a number one contender to the World Heavyweight title.

The Prime Time Players had a lot of potential early on too.  But I think after Abraham Washington's departure from the company a lot of the wind was taken out of their sails.  Seriously, this duo needs a good manager to help them refocus.  The Usos never seemed to catch a break, although I enjoy their work too.  Primo and Epico have been jobbers lately not only to other teams, but to singles guys like the Great Khali and Ryback.

Rey Mysterio and Sin Cara are both back, so let's see if they stick it out.  If I was a betting man several months ago I would have put my money on a Mysterio-Cara match at Wrestlemania.  Now I'd say there's a better chance of a Bryan-Kane match that night.

Unfortunately Tyson Kidd is hurt so his partnership with Justin Gabriel is on the sidelines.  They split up Kofi Kingston and RTruth so the stars could pursue singles careers.  It worked for Kofi briefly, but now that he's without the Intercontinental title, we've seen very little of him.  Then there's Zack Ryder and Santino.  Need I say more?

On the horizon there have been hints of a Tensai-Brodus Clay tag team.  I'm not sure I love the idea, but again, it's just the online buzz, so I'm not buying into it just yet.  Of course on NXT the new tag team champions Adrian Neville and Oliver Gray.  Regular readers now I'm high on Neville and can't wait to see him on the main roster.  Perhaps it may be as a tag team wrestler in the not-so-distant future.

Only time will tell how the tag team situation shakes out, but I think others would agree there are a lot of issues with the current state of affairs.


Posted by Kevin Hunsperger at 4:36 PM