ROH: Up a Paddle without a Stream 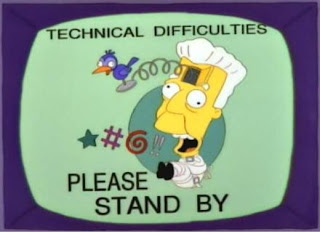 Ring of Honor has been doing Internet Pay Per Views for a couple of years now. Until recently, as far as I can recall, they have gone off without a hitch. Over Wrestlemania weekend the two ROH Ippvs had some technical difficulties with the streams going down during the show. Because of the technical issues with the shows, ROH decided to end their partnership with Go Fight Live and bring all online streaming capabilities in house.

The first show to try the new streaming set up was Saturday night’s “Border Wars” headlined by the ROH title match between Davey Richards and Kevin Steen. This was a title match that had been building for six months and a match a lot of people were looking forward to seeing. Unfortunately, by the sounds of it, the only people who got to see it were the fans in the arena.

Prior to Saturday, ROH tested the new on-site streaming on Wednesday by offering fans a free match of CM Punk vs. Bryan Danielson. The number of viewers crashed the system. This should have been a huge red flag given the Ippv was only three days away. After the crash, ROH issued the following statement.

ROH Fans - We apologize for the difficulties in watching the Free Punk Vs Bryan Video as we did not anticipate the exorbitant amount of fans trying to watch it all at once.

For those that missed it, we will leave it up through the weekend as well as post it to YouTube.

Rest assured, this was due to our media server not handling the load that was created by this free video. For our iPPV this weekend, we will be using a highly regarded Content Delivery Network (CDN) to prevent anything like this from happening.

With ROH’s guarantee that there would be no crashing of their live stream, I ordered the PPV on Saturday afternoon hoping to do a review for my123cents. I ordered the show around 3:45 and at 4:20 went back to ROH’s website to prepare for the show. Since I’m not a regular visitor to the ROH website, it took me a few minutes to figure out how to access the page the where the show was streaming. After finding the page, I was informed I needed to log in to access the Ippv. That’s when the problem started.

For the next 45 minutes, I tried to log in and repeatedly got a “that function is unavailable at this time. Try again later” message. I thought maybe I was doing something wrong so I went to Twitter to see what other people were saying about the show and found out about 98% of everyone who ordered the show couldn’t watch it. I finally gave up and decided to request a refund from ROH. At the time, ROH had not made a statement regarding the issues with the stream.

Later in the evening, ROH did issue this statement:

Dear Fans,
Again we are extremely frustrated by the ippv result tonight and offer our deepest apologies.
Since Showdown in the Sun, we have been working endlessly to provide an optimal ppv experience which we believe we have achieved.
For our website, we increased our server memory x3 and doubled its processing power. Still, it seems that our architecture could not handle the excessive user logins and we are left with a great stream that our fans can not see.
If a refund is demanded, it WILL be given. Otherwise we would like to offer full retention of the replay for Border Wars as well as FREE access to the Best in the World PPV on June 24th for anyone who ordered Border Wars tonight. This will also include retention of the Best in the World PPV in your myPPV accounts.
We WILL get this right no matter what it takes in time for Best in the World.

While I appreciate ROH making good with offering the next Ippv for free to fans who purchased “Border Wars,” I think it’s a little too late. After three consecutive shows with technical issues, will fans want to take the chance on another show? I have admitted to not being a big ROH fan so maybe I’m in the minority, but I don’t think I’m going to clear my calendar to be free the night “Best in the World” takes place.

As the saying goes, fool me once shame on you. Fool me twice shame on me. What are your thoughts? Will you be more or less hesitant to order future ROH Ippvs, or Ippvs from any company based on the technical issues of the last few shows? Share your thoughts on our Facebook page or send us a Tweet.

For the record, Evolve had two Ippvs over the weekend and CZW had one on Saturday night. I have heard no complaints from those shows due to technical issues. This seems to be a ROH only occurrence.

Posted by Kevin Hunsperger at 12:54 PM

Email ThisBlogThis!Share to TwitterShare to FacebookShare to Pinterest
Labels: Ring of Honor, ROH