Indy Stars Rise to the Top 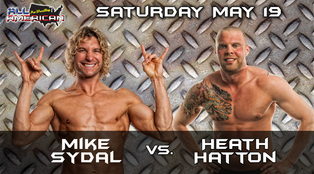 All American Pro Wrestling returns to the Black Diamond Harley Davidson Warehouse in Marion, Illinois for another taping of Collision.  The May 19th show (no Kane will not be there) has several great local and regional indy talent already booked.

Hatton (who we saw on WWE Extreme Rules against Ryback) will be on the card.  He takes on Mike Sydal (the younger brother of WWE star Evan Bourne).  These two have been tag team partners before and now will go one on one.  It's fair to say each man is quickly climbing the ladder of success in the independent ranks.  Hatton of course recently made his WWE pay per view debut.  Sydal has made appearances in Ring of Honor and other promotions around the country. 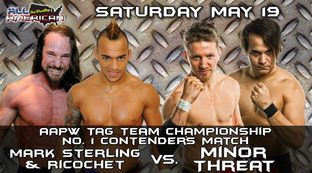 Indy star Ricochet makes his debut with the company.  He's made quite a name for himself around the country and the world.  "The Future of Flight" has been wrestling for Dragon Gate USA and has agreed to team with Mark Sterling (his regular partner Jeremy Wyatt is on the mend after suffering a broken leg).  That duo will face Minor Threat, Ace Hawkins (who also wrestled at WWE Extreme Rules as "Aaron Relic") and Brandon Espinosa.  This match will determine the number one contenders to the tag team championship, which is currently held by Team Overkill (Matt Cage & Christian Rose). 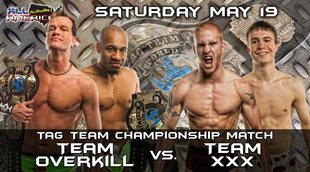 But that's not all, and we may actually have new champs for the winner of that match to face.  Team Overkill will defend against Team Triple X.  Jay Spade and Joey O'Riley are best friends and two of AAPW's best high flyers.  Can their aerial assault trump the mind games of Cage and Rose?  Should be an outstanding match.

All your other AAPW favorites will be a part of the action too.  So join us.  Tickets are $10 for adults and $8 for kids.  Veterans get in free.  See you there Saturday night.  Doors open at 6, belltime is 7 p.m.  Be there!  If you don't live in the area, watch Collision and All Access on the AAPW YouTube channel.

Posted by Kevin Hunsperger at 5:20 AM