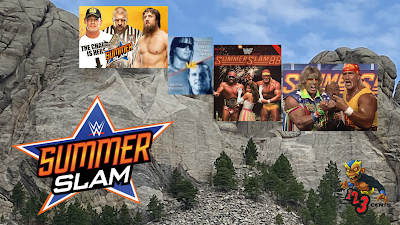 SummerSlam makes its return this Saturday, so I thought, what better topic for this week's Mt. Rushmore than my favorite SummerSlam main events. Please note I said my favorite vs. the best because I think those are two very different things. My list, as you will soon see, is built mostly on nostalgia.

John Cena vs. Daniel Bryan (2013): This match, I realize, is probably a happy accident in terms of how it all played out. Daniel Bryan, my favorite wrestler of that era, was finally getting some main event love. Sure, he'd been the World Champion earlier, but I felt like he was truly over now, and the powers that be seemed to be on board.

British Bulldog vs. Bret Hart (1992): My all-time favorite tag team is the British Bulldogs. In the 80s, that duo feuded with the Hart Foundation. The matches were incredible. Fast forward a few years, and now Davey Boy Smith and his brother-in-law Bret Hart are feuding for the Intercontentinal Championship. Both men were good guys, but that didn't stop them from bringing out all the stops.

Hart and Smith closed the show at Wembley Stadium. It was the first and only time in SummerSlam history that the event was held overseas and that the IC Title match was in the main event. Bulldog got the victory in this hard-fought match. Unfortunately, his reign and his time in WWE were cut short, but that doesn't take away from this incredible matchup.

The Mega Powers vs. The Mega Bucks (1988): I can't leave off the first SummerSlam main event. This was reffed by Jesse 'the Body' Ventura and featured the new WWF champ Randy Savage and Hulk Hogan teaming up against Andre the Giant and 'The Million Dollar Man' Ted DiBiase. It was a solid main event for the inaugural event.

The match ends with Elizabeth showing off her legs and distracting the Mega Bucks. It was great storytelling as the seeds were being planted for the eventual breakup of the Mega Powers, which would culminate at WrestleMania V.

Hulk Hogan and the Ultimate Warrior vs. Sgt. Slaughter, Col. Mustafa, and Gen. Adnan (1991): What an awesomely bad main event this was. It's the era I grew up in. I have to pick it. I loved this time and everything that was going on in the WWF at the time. Newcomer Sid Justice had just arrived and was the referee for the match. Ric Flair was being talked about coming in at the time. I was so stoked.

But yes, the match quality here was low, but it was fun. As a fan, I had no clue about the tension with the Warrior at the time. Little did we know that would be the last time we'd see him for six months until WrestleMania VIII. As I write this, I'm noticing many connections between SummerSlam and WrestleMania... go figure.

So what are your favorites? I think John Cena and Roman Reigns will close the show this year and do an excellent job.

Posted by Kevin Hunsperger at 10:22 PM