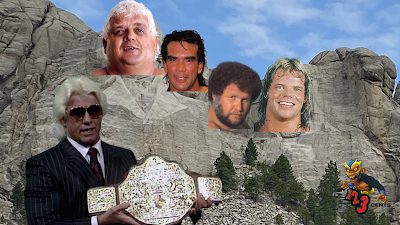 Last week, I launched a new concept for the blog with the Mt. Rushmore of Hulk Hogan's 80s feuds. So it only seems fitting that we hop over to the NWA side and look at Ric Flair's top four feuds in the 80s. I found coming up with this list more difficult than Hogans. I also discovered last week that most people agreed with my picks (read them here); however, this week, I expect to get some backlash.
I'll preface this by saying in the 80s, I despised Ric Flair. He was one of those wrestlers I loved to hate. However, today, he's my all-time favorite. Sometime in the late 80s, I began respecting Flair and becoming a fan. By the time he arrived in the WWF in 1991, I was all-in with Naitch. 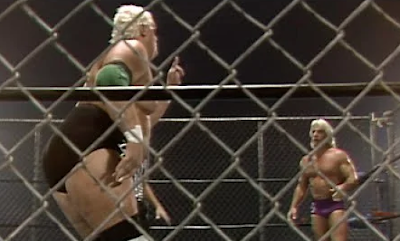 Dusty Rhodes has to be the best foe for Flair of all time and not just the 80s, right? I mean, Rhodes-Flair has to be on the Mt. Rushmore of wrestling feuds. Maybe I'll make that list soon. Their battles in the ring and on the microphone were what made Jim Crockett Promotions so great. Saturday nights at 6:05 (5:05 CST) was where I spent my time taking in all the action.
The bloody battles they had in singles, tag team, six-man tag, and even War Games matches were the personification of intense. Trading the NWA Championship, main eventing the Great American Bashes, and Starrcade kept fans at the edge of the seat time after time. The two even battled it out in the final WCW pay-per-view in 2001 in a tag team match with Dustin Rhodes and Jeff Jarrett as their respective partners. 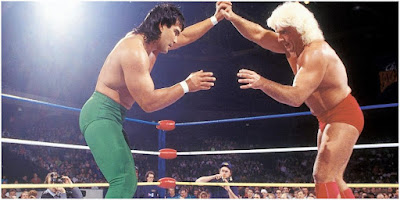 Ricky Steamboat had a few runs against Flair. Since I'm sticking to just 80s opponents, I feel justified in this as the two had some great matches in the early 80s before Steamboat heading to the WWF, where he spent the mid-80s and returned to the NWA in 1989 to face Naitch.
At that time, the two put on some highly regarded matches, including the night Steamboat won the big gold belt from Flair. Their trilogy is still talked about to this day. (I know both have acknowledged their non-televised matches in the 70s were even better.) 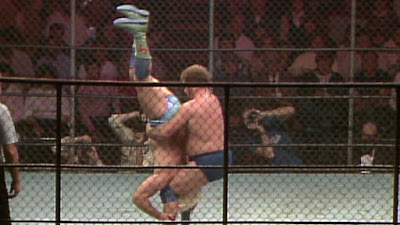 Harley Race may be a surprise pick to some, but when I was growing up and watching Wrestling at the Chase, I remember Race calling out Flair and wanting another shot at the NWA Championship. The two traded the belt, and Flair beat Race for the gold in the main event of the very first Starrcade. My buddy Chad Smart has told the story of watching these two battle it out in a high school gym at the first wrestling show he attended. So whether on closed-circuit television or a small house show, these two always seemed to go at it. 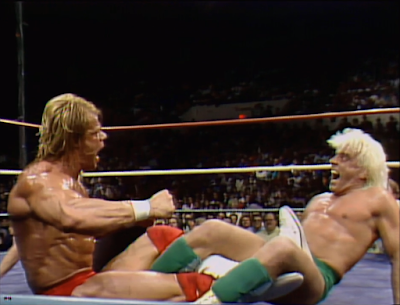 Lex Luger is probably the most controversial of my choices. But I'll explain as best I can. When Luger came to JCP and joined the Four Horsemen, it seemed like it was only a matter of time before he'd split off and challenge Flair for the belt. As his nickname implied, Luger was the 'total package .' When he was kicked out of the Horsemen, I fully expected him to beat Flair for the championship.
I was genuinely disappointed when he came up short at the 1988 Great American Bash, and the match was called due to Luger's intense bleeding. Then a few months later, I was certain Luger would beat Flair at Starrcade but again came up short. In the meantime, it seems like the company was grooming Sting for that spot. (By the way, Sting will definitely be on the Mt. Rushmore of Flair opponents in the 90s.)
Posted by Kevin Hunsperger at 10:21 PM