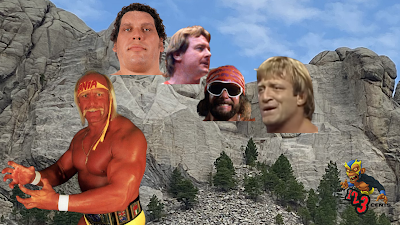 By Kevin Hunsperger @kevinhunsperger & @my123cents on Twitter Listen to the podcast  Follow my blog with Bloglovin
It's been a long time coming, but I'm doing something to get this decade-old blog up and running again. While it's not an original idea by any means, I am going to start writing weekly with a Mt. Rushmore theme. I mean, wrestling fans these days seem to create some sort of Mt. Rushmore of Wrestling ____ all the time, so why not me? And for the record, I actually took a picture of Mt. Rushmore I'm using while on vacation earlier this summer in South Dakota.
First up, the Mt. Rushmore of Hulk Hogan's 80s Feuds. With the recent passing of 'Mr. Wonderful' Paul Orndorff, I got to thinking about his significance in pro wrestling and quickly deduced that he is on the shortlist of Hulk Hogan's greatest foes (not just the 80s, but of all-time).
Andre the Giant and Hulk Hogan were the best of friends during the first few years of Hulkamania. Andre was in the locker room celebrating Hogan's victory over the Iron Shiek at Madison Square Garden. They teamed up to face members of the Heenan Family. That's why it was all the more shocking when in January 1987, Andre declared war on the Hulkster and hired Bobby Heenan as his manager.
The two had a huge main event at WrestleMania III and went on to battle against each other for the next 18 months, meeting in tag matches, singles matches, and the big blue steel cage. More than 33 million people watched their epic match on NBC's 'The Main Event' in February 1988. I still remember crying when the crooked referee counted Hogan's shoulders to the mat. Yes, I was 14 at the time...
'Rowdy' Roddy Piper was the man I loved to hate in the early days of Hulkamania. He set the standard for a wrestling heel back in those days. He was a master on the mic and someone hard to beat in the ring. Hot Rod was front and center in the Rock 'n Wrestling Connection which, of course, led to the first-ever WrestleMania. While we never got a one-on-one encounter between Hogan and Piper at WrestleMania, their work before the event to set the tone for 80s wrestling is unforgettable.
'Macho Man' Randy Savage came into the WWF in 1985 and quickly set his sites on Hogan's championship. The two had some great matches even before Savage won the Intercontinental Championship. Those matches continued to impress after Savage's win over Tito Santana. Then, of course, we had the epic build of the Mega Powers. This is without a doubt one of the best stories ever told in wrestling. It wove in nicely with the previously mentioned Andre the Giant match on NBC.
The explosion of the Mega Powers added a new element to WWF programming. It all came to a head at WrestleMania V, with Hogan once again winning the gold. Savage tried the rest of the year to regain his belt but always came up short. The Hogan-Savage story worked on so many levels and one that the creative team could depend upon.
'Mr. Wonderful' Paul Orndorff, as I mentioned, is the inspiration for this blog. He, too, had some matches with Hogan before the first WrestleMania. His association with PIper made him another one of those guys I loved to hate. But then, after the mishap at Mania, Orndorff became a good guy and teamed off and on with the Hulkster. Then in the summer of 1986, Orndorff snapped and turned on Hogan, rejoining former manager Bobby Heenan.
This feud was the most serious threat to ending Hulk's first title reign. I thought WWF might make the switch a couple of times, most notably on the January 1987 episode of Saturday Night's Main Event. Inside the Big Blue Cage, the match saw both Hogan and Orndorff escape at the exact same moment.
So there you have it. A very concise but precise list of Hulk Hogan's best four feuds in the 80s. Who is on your Mt. Rushmore of the Hulkster's foes?
Posted by Kevin Hunsperger at 10:18 PM