On the road with Stride Pro Wrestling 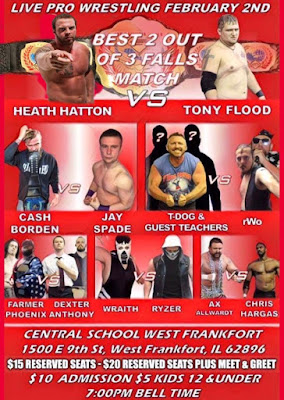 Stride Pro Wrestling is venturing out for the first time since finding a new home in Carterville in November. But don't worry, we'll be back at the facility on Division Street on February 9. However, on Saturday, Feb. 2 Stride takes over Central Junior High School. The address is 1500 E. 9th Street in West Frankfort.

The event that night is a fundraiser for the school. Several teachers are getting involved in the action and will be teaming up and fighting for their school. The main event will see the crowning of the Stride Pro Wrestling Champion, as the championship was declared vacant earlier this month. Heath Hatton and Tony Flood will battle it out to determine who gets the gold.

"The King" Chris Hargas faces Ax Allwardt. If Ax wins, he gets a match against his former manager J. Wellington Beauregard. Beauregard, who manages the King, will be the guest referee for the match. However, an enforcer will be on hand too.

Former friends Wraith and Ryzer will do battle as do Legacy Champion Cash Borden and Jay Spade. The issues between all four men have become extremely personal, especially the battle between Borden and Spade. Whoever wins that match will have a new contender to deal with too, as Jason Tiller takes on Brandon Espinosa and Joey O'Riley in a triple threat match for the number one contendership to the Legacy Title. Tag team champions Farmer Billy Hills and Scott Phoenix put their belts on the line against the hair of Dexter Roswell and Mr. Anthony. That'll be a great one to see how it goes down too.

It may be cold outside, but the action will be heated on Saturday night. There are still a limited number of meet and greet tickets up for grabs ($20 each). Send a message to here for more details. Bell time is 7 p.m.

Posted by Kevin Hunsperger at 3:10 PM