Sometimes you want to go where everybody knows your name

I arrived in Dallas days ahead of WrestleMania 32 last week.  My friend Chad picked me up at the airport and we headed to the NWA Mid South: Parade of Champions show.  The next day was Friday and we had nothing planned until NXT Takeover: Dallas.  I asked Chad over lunch what we were going to do that day, to which he informed me, "it's a surprise."

WWE Superstars Neville and Kalisto were doing an autograph signing at the Toys R Us in Arlington.  When we pulled into the parking lot I knew exactly why were there.  Neville is one of my favorite Superstars, but there's a story to tell... which is why we're all here now.

In 2011 I was doing commentary for All American Pro Wrestling.  I was also involved in a storyline in which I'd be getting into the ring to wrestle at our big show in January 2012.  The event was going to be recorded and released on DVD.  AAPW: Collision aired on the local ABC affiliate at the time. Besides bringing in Colt Cabana, I was informed two international wrestlers named PAC and El Generico would also be on the AAPW Main Event card.  I watched their work to familiarize myself with them, having not known much about PAC at the time.

The day of the show our group of guests, which also included Matt Cross, arrived.  I can't tell you how awesome all four of them were that day.  PAC worked with one of our guys in the ring before the doors opened, giving him some solid advice.  I was impressed not only with his in ring work, but PAC's attitude and professionalism.  Because I was on the poster for the event I had signed a bunch for fans (for those who don't know I'm also a TV news anchor and several viewers had come out for the event). 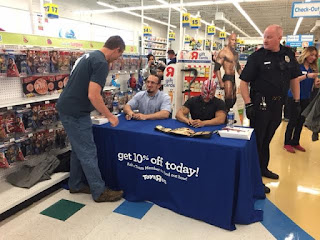 Now back to Toys R Us in Arlington.  Since Neville has been on the main roster, Chad has given me a hard time about my so-called man crush.  As we stood in line, we listened to a girl behind us swoon about Neville.  Chad asked if I was jealous of her.  We laughed and joked about it for the 90 minute wait.

Finally it was our turn for a photo and autograph.  Chad went first.  Then as I walked to Neville he said, "Kevin! How's it going?"  You would have had to surgically remove the smile from my face. I glanced at Chad and seeing his reaction was priceless too.  After more than four years, Neville remembered me. We shook hands, exchanged some quick small talk and took the pic. It made my day and is one of my favorite WrestleMania weekend moments of all the nine times we've made the journey.  I still think it's cool that a WWE Superstar knows me by name.

Posted by Kevin Hunsperger at 12:35 AM