During CM Punk's "Pipe Bomb" promo a couple years ago, the WWE Superstar wanted the company to bring back the famed ice cream bars from the 80's and 90's.  It's something that generated a lot of online buzz after it was said, and I have to wonder if the company would consider bringing back the sweet treats.


Of course, I hope that they do.  I loved the WWF Ice Cream Bars.  But when I was a kid, they were in short supply, at least in my area.  The first time I had one was on Easter Sunday.  Believe it or not, the ice cream man was cruising through the neighborhood.  After indulging on peanut butter eggs and chocolate bunnies earlier in the day, I figured why not chase it all down with an ice cream bar.

After collecting the loose change in my room, I flagged down the truck.  I scanned the selections and much to my surprise, I saw Hulk Hogan's image staring back at me.  I knew right away what I was getting that day. 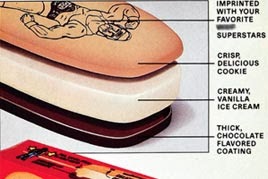 The Superstar on my bar was none other than the Junkyard Dog.  For those who never had a WWF Ice Cream bar, it was a Superstar on a cookie on top of vanilla ice cream with a chocolate coating on the back.  They were delicious.

I think the bars were available at the arenas for house shows, but other than that and my experiences with the ice cream man, I don't remember seeing them in stores.  So, in reality, I may have had less than a half dozen growing up.  I also have no recollection of them returning in the early 90's.


They say, what's old is new.  So as "children of the 80's" look back on the things from their childhood, it would be a great time to bring back the ice cream bars.  WWE is a household company now, and probably more child-friendly than it's been in decades, so I think the company would generate some cold hard cash.  Of course, along with current Superstars and Divas, the bars would need some Legends too.

Posted by Kevin Hunsperger at 1:34 PM