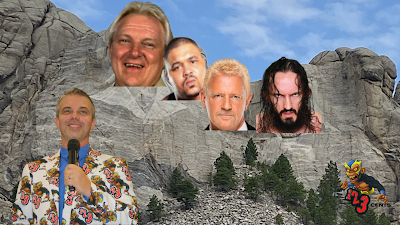 After a delay, the My 1-2-3 Cents Mt. Rushmore is back. The last blog I wrote on the subject was the bucket list of wrestlers I'd like to meet. This time, it's about the top four wrestlers I've met. I have had the good fortune of meeting many wrestlers through the years, so I am narrowing this down a bit by only naming wrestlers that I've had conversations with and not just a meet-and-greet experience. 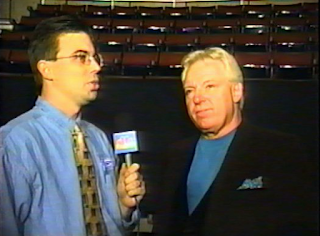 Bobby "The Brain" Heenan is one of my all-time favorite personalities in wrestling and, without a doubt, the greatest manager of all time. In 1998, when I was a young reporter (two months of experience), I was able to get access to a WCW Thunder in Huntsville, Alabama. While there, I interviewed Goldberg (just into the streak), Ray Traylor, Buff Bagwell, and Bobby Heenan. It was a great come true. Our interaction was probably about five minutes or so, but it meant the world to me. I never in my wildest dreams imagined such an opportunity would present itself to me. 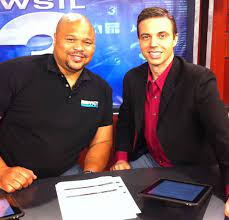 When TNA Wrestling came to southern Illinois for a BaseBrawl event, I reached out to get a wrestler on the morning newscast I co-anchored. I was excited to learn that D'Lo Brown would be filling that role. We chatted before his appearance and after as well. D'Lo even gave me his number. We've actually texted a few times, which to me is surreal. But what really impressed me was when I was in Las Vegas back in 2018 and trying out for a gig with Impact Wrestling, D'Lo was there and remembered me by name. A great guy and one of the most underrated wrestlers of all time. 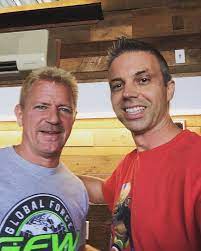 Jeff Jarrett and I first met in 2011 at that above-mentioned BaseBrawl event. However, it was a brief encounter, and a few years later, Double J returned to southern Illinois to promote another wrestling event at the ballpark, but this time with Global Force Wrestling. Jeff and I chatted before our interview and after and also indulged me with a selfie. He also bestowed me with the privilege of announcing one of the matches the night GFW came to town. Listening to the My World Podcast that he hosts often reminds me of how laid-back he met. A class act all the way. 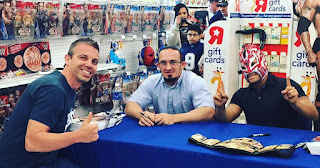 Of course, I can't have this list without adding PAC to it. I've told the story many times, but here's the short version. We met for the first time at an AAPW event called Main Event in January 2012. Then crossed paths at WrestleMania Axxess in 2014 and at an autograph signing in 2016 (he remembered me by name both times). He's a great guy, and I wish him nothing but continued success in the ring.

Posted by Kevin Hunsperger at 7:46 PM