The Power of Nostalgia 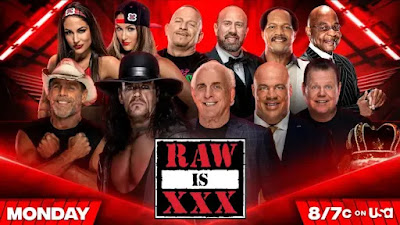 January 11, 1993-- I remember it well. I was a sophomore in college and ten years into my wrestling fandom. Over Christmas break, I watched the last of the Prime Time Wrestling shows, a program I had enjoyed for about a decade. Now it was time for something new, Monday Night Raw.

It's hard to believe that was 30 years ago. Now, at 49 years old, I am still a fan, but I still need to become more committed to watching each week. Having cut the cable cord years ago, I have only had a few opportunities to watch Raw live. However, I located a feed of the special anniversary show via TikTok.

From the opening segment, featuring the face of 80s wrestling, Hulk Hogan, to the final bell with long-time attraction Brock Lesnar, the show was packed with everything a nostalgic fan like me craves. Ric Flair, DX, Kurt Angle, Undertaker, and others. Memories from the past three decades flooded back. My favorite current storyline featuring The Bloodline provided even more entertainment. I can't wait to see how it all plays out, as I've seen plenty of conflicting theories.

Sure the latter was choke slammed by the Undertaker, but I still believe that being in the ring with someone the caliber of the Deadman (or Biker in last night's case) goes a long way. These moments provided feel-good moments for fans (I especially enjoyed it after a not-so-great day).

What are your thoughts? Let me know!

Posted by Kevin Hunsperger at 8:06 AM