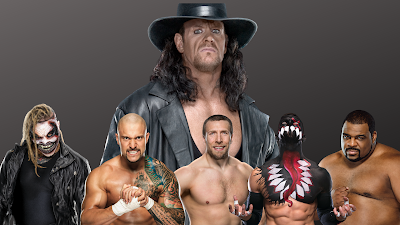 By Kevin Hunsperger
@kevinhunsperger & @my123cents on Twitter
Listen to the podcast
Follow my blog with Bloglovin
There has been a lot of talk that this weekend the Undertaker will get a final sendoff at Survivor Series, the event that he first appeared on some 30 years ago. I still can't wrap my brain around the idea that Undertaker has been an active part of the WWE roster since my senior year in high school. Obviously, his appearances have scaled back over the past decade, however, here are five Superstars I'd like to see lock up with the Undertaker.
5. Keith Lee - The big guy is new to the WWE roster but not new to the ring. I feel like Lee has a huge upside and is only going to continue to thrive. A match with the Undertaker would have given him that all-important rub and I think he could totally hang with the Undertaker.
4. Finn Balor - The current NXT champion put this out on social media recently. Full disclosure, it was that tweet that actually gave me the idea to write this blog. Balor is an amazing talent and grossly underutilized. Imagine the entrance for Demon and the Deadman. Wow!
3. Daniel Bryan - I know Bryan teamed with the Undertaker and Kane several years ago. But to my best recollection, the two never had a match against each other. Bryan remains one of my favorite Superstars on the roster and I feel like a match between these two would be one for the ages.
2. Karrion Kross - I haven't put my finger on it exactly, but there is something special about Kross. Of course, there was no control over it, but his injury was really disappointing. Once he's healthy and ready to return, the sky is the limit for Kross. And if he were to cross paths with the Undertaker, I think it would be nothing short of amazing.
1. The Fiend - Duh. I know Undertaker battled Bray Wyatt at WrestleMania 31. But Bray has come a long way since then and the Fiend character is one of the hottest properties in all of wrestling right now. There has been plenty of speculation and thought that the Fiend may interrupt Sunday's celebration of Undertaker's career. It would be the ultimate passing of the torch for the Undertaker to do the honors for the Fiend and a new generation of phenom is unleashed.
What are your thoughts? Who would you add to the list? Let me know!
Posted by Kevin Hunsperger at 12:28 PM