Way Back WhensDay: You Can't Do That on Television 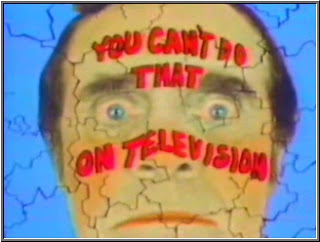 (Note: I know I spelled Wednesday wrong, it's a play on words.)

I was about 9 years old when cable television reached our community of High Ridge, a small town about 20 miles outside of St. Louis.  I still remember the dial boxes sitting on top of the TV in our kitchen and family room.  Instead of using a remote to zip through the channels, we had to turn the dial and click through each channel.  Life was so brutal.

I have two strong memories from that time period.  One was MTV and all the music videos that featured the stars I'd listened to on the radio for years.  The other was Nickelodeon, the network for kids.  The show that attracted my attention back then was called You Can't Do That On Television.  For people who have never seen it, if you're older, it was a kid version of Saturday Night Live.  If you're younger, it was the precursor to All That.

YCDTOTV featured a variety of child and teenage stars, telling jokes, doing skits, and getting slimed.  The sliming was always my favorite.  Whenever someone uttered the phrase "I don't know" a bucket of green slime was dumped on their head.  I remember at one point they actually teased a show that would feature different colored slime.  It was monumental in my tween years.  If someone said "Water" on the show, you guessed it, they were doused with a bucket of water.  Some stars had the double whammy of getting slimed and watered.

My friends and I would actually make our own slime and take turns playing dumb and saying those three famous words.  While it wasn't as epic as the sliming on TV, it was a memory of my childhood that stands out to me.

The cast when I watched was great.  I had a crush on the main star, Christine "Moose" McGlade.  Lisa Ruddy, Kevin Kubushekie, and Alasdair Gillis were also favorites of mine.  But perhaps the most talented member was the only adult male on the show, the late, great Les Lye.  He played so many awesome characters including stage hand Ross, Barth (owner of the health code violating Barth's Burgers), and the dad.  Music star Alanis Morissette appeared in five episodes of this Canadian hit.

I wish Nickelodeon would go retro and run episodes of YCDTOTV at some point, or even release the show on NetFlix or DVD.  Everytime I see a locker, I have the urge to climb in and start telling jokes.  Thanks for the memories.

Posted by Kevin Hunsperger at 5:11 PM