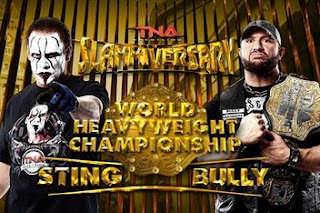 On Friday, I wrote a blog detailing some of the “issues” I felt TNA needs to address to improve the company. After watching Slammiversary XI, I am still concerned most of those issues will continue to be problems going forward. Because of these issues, I have decided to hold off on purchasing tickets for Bound For Glory as I want to see how TNA proceeds before throwing down a chunk of change for a show that might possibly be equally parts entertaining wrestling and annoying booking. With that said here are my thoughts on what went down in Boston.

I mentioned in the blog on Friday how I have little interest in Aces and Eights because they do nothing but lose. Instead of having a solid showing at Slammiversary, they turned out to be the “pu***es in leather” Hulk Hogan referred to them as early in the show. Garrett Bischoff/Wes Brisco/Mr. Anderson lost a six-man tag match to Magnus/Samoa Joe and Jeff Hardy. D-Von lost the TV title to Abyss. Bully Ray retained the World Title only after Bischoff, Doc, D-Von and Brisco ran in and got beat down by Sting allowing Mr. Anderson to hand Bully a hammer which he used to hit Sting in the head knocking Sting out for an easy three count.

Again I ask, am I really supposed to care about Aces and Eights? If so, what have they done to make me interested? I’m not asking for complete dominance. That would be too extreme in the opposite direction. But is it too much to ask that any member of Aces and Eights get a victory that means something?

If Aces and Eights really want to win a match, I recommend they take at least a couple of months off from wrestling. In Friday’s blog, I talked about how wrestlers disappear for months at a time. Usually it’s mid-card wrestlers who fans forget all about, then when they reappear fans are in a stunned silence trying to figure out who is in the ring. When a popular wrestler disappears and reappears the TNA playbook is to have the wrestler get the big win.

At Slammiversary, Chris Sabin won the X-Division title after returning in the past month from being on the injured list for almost a year. Abyss’s return to TV was capped off by winning the TV title. James Storm hasn’t been gone but his tag-team partner last night, Gunner, hadn’t been seen in God knows how long. In their first title match StormGunners won the Tag Team Titles. I don’t know what long term plans TNA has in place so I may be being typical internet wrestling fan nitpicking for the sake of complaining, but none of these title changes seemed necessary.

Being X-Division champion allows Chris Sabin to challenge for the World Title at some point over the summer. I can see why TNA would rather have a Sabin/Bully Ray match instead of a Kenny King/Bully Ray match but it still feels like Sabin’s victory was done simply because he returned from a serious injury. Abyss’ win was bad storytelling. Abyss replaced his brother Joseph Park after Park was attacked backstage by Aces and Eights. Joseph had been counted out so the match was over. The D-Von/Abyss match never should have happened. Trying to remember why James Storm was inserted into tag match since from what I recall he had been calling out AJ Styles and dealing with Aces and Eights. Putting the tag straps on a new makeshift team instead of an established makeshift team seems shortsighted. We’ll see where it goes.

Since I’ve been negative so far let me dish out some praise. The match of the night and surprise of the night had to be the Gail Kim/Taryn Terrell Last Knockout Standing Match. Anyone who’s followed Gail Kim’s career knows she can bring it when allowed to actually showcase her wrestling talent but who knew Taryn was as good as she is before this match? Either she greatly improved since joining TNA or WWE really doesn’t know how to utilize Divas. This was a more brutal and entertaining match than expected and it was given the right amount of time to tell the story.  If you didn’t see Slammiversary, I highly recommend you track down this match.

Kurt Angle was announced as this year’s TNA Hall of Fame inductee. I am of the belief active wrestlers shouldn’t be inducted into the Hall of Fame. Last year when Sting was announced, I questioned the reasoning. After the Hall of Fame ceremony was over it made sense why TNA inducted him and doing so on the tenth anniversary of the company was meaningful. I understand the significance of Kurt Angle leaving WWE for TNA however I don’t t feel this is the right time for his induction. Not only because Kurt is still wrestling but also in terms of historical importance I feel Jeff and/or Jerry Jarrett should be inducted before anyone else. Kurt going in now also looks like another example of TNA putting ex-WWE/WCW guys over their homegrown talent. AJ Styles, James Storm, Christopher Daniels and even Abyss have been in TNA longer than Angle. Why is Angle being inducted before guys who helped found the company?

I briefly touched on the main event when talking about Aces and Eights. Sting losing means he can never challenge for the World Title again. I don’t know how much longer Sting will be wrestling. I do know this stipulation is a good thing as now TNA might push some new contenders into the World Title scene. If memory serves right, Sting has challenged for the World Title at either Bound For Glory or Slammiversary every year since 2006. Time to mix it up. Now I ask TNA to layout a world title match that doesn’t involve ref bumps and run-ins. I won’t hold my breath.

After reading this you might be thinking Slammiversary wasn’t a good show. To be honest, Slammiversary was a perfectly fine wrestling show hindered only by TNA’s standard booking practices. I am not disappointed I paid for the show. I’m only sad that after 11 years, TNA continues to make the same decisions over and over and over. The TNA locker room is full of talent. If TNA wants to grow they have to stop being TNA.  I forgot to mention this earlier so I’m going to briefly throw it in here. Jay Bradley won a spot in the Bound For Glory series. I’m not saying he should win the series but he should be in the final four. This is a chance to build a new star. Will TNA seize the opportunity or will Jay be the Jobber To The Stars in the tournament? Time will tell.
Posted by Kevin Hunsperger at 1:57 PM