To say things got out of hand at the last Pro Wrestling Collision taping would be an understatement.  There were sneak attacks, cheap shots, and even a verbal attack on a five year old girl.  It was crazy.

Perhaps the most surreal moments of the night was waiting the behemoth Bull Bronson lay waste on Collision referees, security staff, and senior ring announcer Bob Fester.  Bronson had previously attacked "The Serial Thriller" Shane Rich.  After refusing to stop the punishment, refs and security tried unsuccessfully to calm down Bull.  Then in a bold move, Bob, a man I have the utmost respect for, attempted to soothe the savage beast.  Blinded by rage, Bronson took a swipe at the 60+ year old Fester.  Bob immediately dropped to the floor and had to be helped back to his feet.


I'm glad that Pro Wrestling Collision owner Chris Hagstrom decided to suspend Bull Bronson.  The safety of everyone had really become a factor.  In a show of support to Bob, my broadcast partner Jerome Cusson has decided to sit out of this weekend's taping.  His full explanation can be read right here.  It's a move I respect and support, but as they say, the show must go on.  Hagstrom will join me in the booth Saturday night and has assured me that security will be increased to ensure the safety of the fans, wrestlers, and staff.  I appreciate the move and look forward to calling a night of solid action. 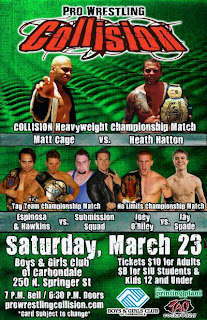 Here's a preview of what you'll see.  Tickets are just $10.  Join us in Carbondale Saturday night.  It's a big night as Matt Cage follows up on the verbal smackdown he laid on Heath Hatton and his family at the February show.  Hatton's title is on the line, as well as his pride.

The Submission Squad joins us to challenge tag team champions Ace Hawkins and Brandon Espinosa.  The No Limits Title will be defended Saturday night too, as Joey O'Riley puts the gold up against his friend and former tag team partner, Jay Spade.  This will also be the debut of Spade in Pro Wrestling Collision.

Justice, Shane Rich, El Matadoro, and Ax Allwardt are also slated to appear.  No doubt it'll be an emotionally charged and memorable night of independent wrestling action.
Posted by Kevin Hunsperger at 4:35 PM