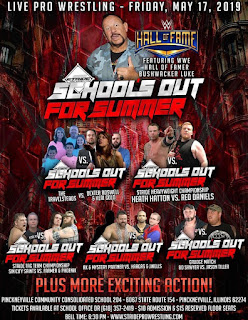 Things are certainly heating up in Stride Pro Wrestling just in time for summer. This Friday night (May 17) the indy company heads to Community Consolidated School 204 in Pinckneyville, Illinois for a special fundraiser. It's called School's Out for Summer and features several great matches.

Jerry 'T-Dog' Travelstead and Dexter Roswell have seemingly been at odds since the two arrived in Stride in late 2016. Their matches have been great, including a paddle match in October 2017. WWE Hall of Famer Ricky 'the Dragon' Steamboat was the special guest ref for that encounter. I think Roswell's hindquarters are still sore as a result.

Now T-Dog and his family are stepping into the ring. The Travelsteads will face Roswell and his assistant Mr. Anthony along with relative newcomer to Stride, Keri Gold. How will the family fare against three of the most ruthless members of the Stride roster?

Student vs. teacher happens once again. Heath Hatton gets a rematch against Stride Pro Wrestling Heavyweight Champion Red Daniels. Daniels is the first graduate of the Stride school and one of Hatton's prized pupils. The two have been at odds before and now the gold is at stake.

Jay Spade and Tony Flood played a role in Hatton's loss of the championship at Strideiversary in March. This dynamic duo is also causing a stir on the tag team scene. They will battle the champs 'Farmer' Billy Hills and Scott Phoenix.

Ax Allwardt will be joined by a mystery partner (it's not me, despite J. Wellington Beauregard's accusations). The two will clash with J-Wells and his main man, 'The King' Chris Hargas. This has been a very intense and personal situation for more than a year. Will Ax and his partner crown the King and shut up Beauregard?

Another personal situation brewing is between former tag team champions Bo Sawyer and Jason Tiller. Tiller for unknown reasons attacked Warbound at Strideiversary, costing him his shot at the Stride Cup. This grudge match is going to get ugly quick I suspect.

WWE Hall of Famer Bushwacker Luke will join the roster one more time. Bell time is 6:30 p.m. again this FRIDAY night. We'll see you there.
Posted by Kevin Hunsperger at 6:50 AM