By now you've heard of the ALS Ice Bucket Challenge.  It's sweeping the United States as a fundraiser for the ALS Association.  For those who don't know, ALS is a disease for which there is no cure.  It essentially leaves the person living with it a prisoner of their own body.  They lose the ability to walk and talk.  Most people with ALS only live two to five years after the diagnosis.  Learn more here.

The challenge has not only helped to raise money for research, but awareness about ALS as well.  As of this posting on August 24, the ALS Association has received more than $53.3 million dollars from 1.1 million new donors.  That is amazing to me.  But of course whenever something good happens, there are those who have to take the air out of the tires so to speak. 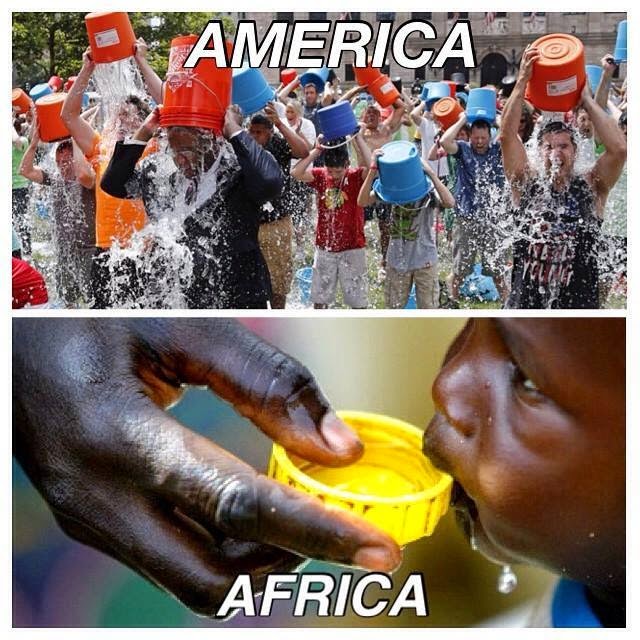 I'm not looking to create a war of words by any means, but I am going to voice my opinion about the people who have been posting the memes and other comments about how the challenge is a waste of water and people are doing it to get out of donating.  Everyone I know who has taken the challenge has made a donation of some kind to the ALS Association.  Even if some are "getting out of it", the group has raised more money with this challenge than in a previous year of fundraising.

Now on to those who say it's a waste of water.  I understand your point about that, but I ask you these three questions.

1. Do you jump right into the shower without running the water first to warm it up, and do you turn off the water while brushing your teeth?

2.  Have you donated to one of the many groups that provides fresh water for those living in countries that don't have access to it?  (Check out what The Water Project does.)

3.  Do you pay any of the bills of the person taking the challenge?

If you answered Yes to all three of these questions, then please continue your postings on social media. Otherwise, consider doing these things and stop being a hypocrite.

Another aspect of the challenge that is drawing criticism from pro choice groups is that the one study by the ALS Association is using embryonic stem cells.  But the Association says most of the studies underway use adult stem cells, and donors can stipulate which research their money is going toward.  I respect the opinions of those people and hope that folks will still consider making a donation.


I did it with my friends at work.  My family did it too. We donated in memory of Les Higgins.  He recently died of ALS.  Les was a retired sheriff's deputy in our community.  He had a farm filled with everything from donkeys to mini long horns to camels.  On several occasions he opened up his property to our Cub Scouts.  We also recorded a Wild Wednesday segment there for News 3 This Morning and a video called "Down on the Farm" for All American Pro Wrestling.   Rest in peace Les.   We also donated in honor of Don "Donut" Morgan who is currently battling this horrible disease.  Again, check out the ALS Association to help out or find a cause close to your heart and donate.  Let's be positive and move forward folks.  We all could use a little more happy news in our lives.

Posted by Kevin Hunsperger at 12:15 PM