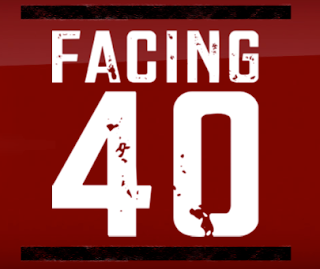 Six months from today I will turn 40.  As I officially begin my descent down the hill I thought I'd start a series of blogs and videos dealing with this new stage in my life.  My goal is to share health, nutrition, and fitness tips, as well as stories from others in my boat.

I once thought 40 was old.  I don't feel that way anymore.  I plan to embrace this milestone birthday and make the most of it.  But to be able to do that, I've got to work at it.  I have never been an athlete.  In my teenage years I ran cross country.  Then for the 20 years that followed, I didn't do a whole lot.  Even during those cross country days, I wouldn't say I put my best foot forward.

About seven years ago I was having a conversation with a coworker who is in pretty good shape.  I told him I felt like I was too old to get into a regular fitness routine, coupled with my weird work schedule and at the time two young children.  He told me that those were just excuses and it's never too late to get into shape.  I joined a gym and made some radical changes to my diet and lost about 20 pounds.

I was able to keep at it, working out and eating healthy up until 2010.  We went on vacation to Disney World and I used the excuse "I'm on vacation, I'll eat healthy again when we get home."  Well, we were on vacation in October.  Then Halloween happened and all the candy around the house made it too tempting.  Thanksgiving taunted me with a cornucopia of calories and of course Christmas brought many sweet treats along with the beverages associated with New Years.

So I officially fell off the wagon and haven't been able to get back on.  It's been a struggle.  I've gained back some of the weight I had lost.  I stopped going to the gym completely.  Not completely, I could probably count on one hand though how many times I've been in the last year.  I do own a BowFlex and use it from time to time.  Nine months ago I started running, but again, not with any consistency.

I've watched several of my friends commit to getting healthy.  So as I face 40, I've decided to refocus my efforts.  After all, I am a medical reporter and the co chairman of the Southern Illinois Men's Health Conference.  It's time to start leading by example.

My goal is simple, by the time 40 comes in six months I want to look and feel better than I do today.  That doesn't seem too crazy.  I've done the weigh in, I'm officially 181.0 pounds.  I don't necessarily want to loss any weight in this adventure, but rather tone up.  They say we all have abs under the belly fat, now the goal is to find them.

Thanks for reading today, and I hope you come back for more installments of Facing 40.
Posted by Kevin Hunsperger at 2:22 PM