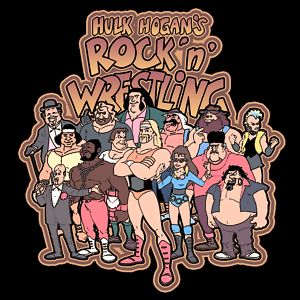 In 1985, wrestling was at a fever pitch, thanks in large part to Vince McMahon.  I know some blame him for the demise of the territories, but I think without his vision and marketing abilities; wrestling would not be where it is today. Wrestlemania and the Rock 'n Wrestling prior to it showed the main stream that wrestling was not to be taken lightly.  Hulk Hogan, Roddy Piper, and Andre the Giant were becoming household names.

In the fall of 85, riding the wave of success of Wrestlemania and Saturday Night's Main Event, the WWF launched a 30 minute animated series on CBS.  Hulk Hogan's Rock 'N Wrestling Connection debuted on September 14, 1985.  I was 12 years old at the time and starting to outgrow cartoons, but my love of wrestling had me tuning in each Saturday morning.

I do remember being taken aback learning that the WWF Superstars were not supplying the voices of their animated counterparts.  But it made sense to use actors, as in those days the WWF travel schedule was hectic and the company didn't have all the connections and hookups that it has today.

The show of course featured Hulk Hogan (who was voiced by "Everybody Loves Raymond" star Brad Garrett.)  His baby face buddies including Hillbilly Jim, Jimmy Snuka, Tito Santana, the Junkyard Dog (voiced by James Avery who was Uncle Phil on "The Fresh Prince of Bell Air"), Wendi Richter, and Captain Lou Albano.  Piper lead a cavalcade of heels including Big John Studd, Nikolai Volkoff, Iron Sheik, Mr. Fuji, and the Fabulous Moolah (looking at the picture at the top of the blog, it appears that Moolah wasn't originally going to be on the show as there's a drawing of Mad Maxine, who was managed by Moolah briefly) Mean Gene Okerlund was also a part of the show.  Someone correct me if I'm wrong, but I'm almost certain that Bobby Heenan was animated on one episode.

There was always some kind of confrontation or challenge between Hogan's crew and Piper's posse.  The babies would always end up "winning" if you will, teaching kids that being a bad guy isn't all it's cracked up to be.

There were live action vignettes that aired in between the roughly 15 minute long cartoons as well.  Those featured the real life superstars on the show.

The show only lasted two seasons, but with titles like "Captain Lou's Crash Diet", "Robin Hulk and His Merry Wrestlers", and "Big Top Boobs" (I'm not making that one up) how can you go wrong?  I would love for the WWE to either release these on DVD (I do have a VHS copy of a couple) or once the network finally gets off the ground include the shows somehow.  It would also be interesting to see them attempt something like this again in the future.  I know the upcoming Scooby Doo animated movie will include some WWE talent, so I can't wait to see that.